Stones, bones, and sherds — this is the stuff of archaeology, right? Well, sort of. It is fair to say that the vast majority of the material that archaeologists use to build their reconstructions of ancient societies comes from these groups of durable artifacts. However, we’d like to let you in on a startling fact that too few archaeologists are ready to talk about. When preservation permits, artifacts made of perishable plant and animal-based materials often outnumber lithics, skeletal remains, and ceramics! 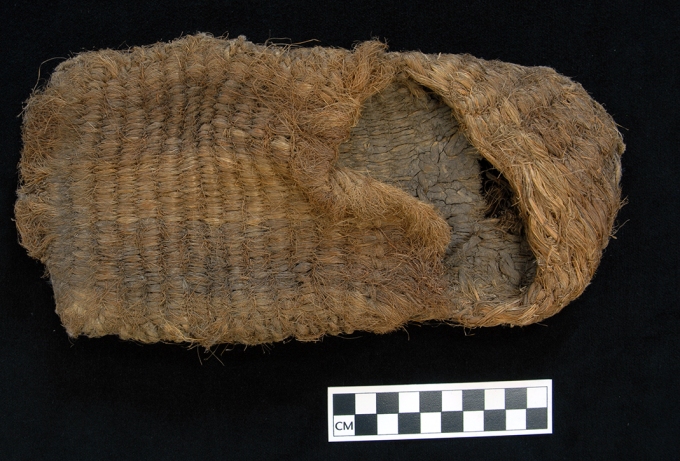 Complete, but well-worn, slipper of Eryngium yuccifolium (rattlesnake master) in warp-faced plainweave with striped decoration made using dyed fibers of the same plant (Object No. 2014.123.14). This sandal has been radiocarbon dated to around A.D. 500.

Working in the dry, dusty caves of Coahuila, Mexico, Walter W. Taylor discovered that for every finished stone artifact he found there were 20 finished fiber artifacts, items that include cordage, nets, baskets, textiles, sandals, and modified wood. Further afield, in the U.S. state of Washington, Dale Croes has frequently written that 95 percent of the artifacts found at waterlogged sites in U.S. Pacific Northwest are made from plant fiber and wood. Most importantly, similar observations have been made at many other sites across the world where extremely wet, dry, or cold conditions have preserved such perishable artifacts. What is so striking about these data is that they dramatically illustrate how most archaeological reconstructions are based on a very small portion of the items that past peoples made and used. Imagine taking just 5 percent of the things that you use on a day-to-day basis, breaking them into pieces, and letting a stranger attempt to reconstruct your life from a sample of them. Clearly, archaeologists are at an even greater disadvantage than is usually appreciated. 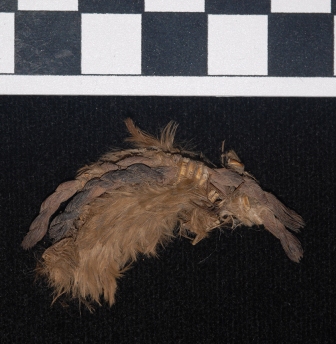 Fragment of turkey feather quill-wrapped cordage of unknown age that was likely part of a blanket or robe (Object No. 2014.123.46). The charred spots may be incidental.

All is not lost, however, because archaeologists are becoming more creative in how we learn about the missing majority by examining every scrap of evidence available, whether it be by scrutinizing fabric impressions in pottery, searching for manufacturing tools, or querying historic documents and transcriptions of Native American oral traditions. Better still, when we look, we find that there are lots more of these perishable artifacts that have survived than we ever thought possible. Certainly more than the two of us ever thought existed! As we’ve been learning, sizable collections of perishable artifacts have been recovered from dry rockshelters and caves in Middle and East Tennessee and adjacent states. Many remain poorly documented, and in the hands of private collectors, but these artifacts stand to contribute immensely to our understanding of ancient Native American lifeways in Tennessee and beyond if we only give them the attention they deserve.

The images accompanying today’s blog illustrate but a small part of the material included in the diverse perishable artifact assemblage from Ravens Cliff rockshelter in Grundy County, Tennessee, which has been at the center of our ongoing research. Material procured in 1969 by the late Jack Pickett, alongside his friend Danny Mankin, was donated to the Tennessee State Museum in 2014. Our study of the perishable artifacts has identified examples of cordage, netting, basketry, matting, footwear, arrow shafts, a sewn textile, and worked deer hide and wood. 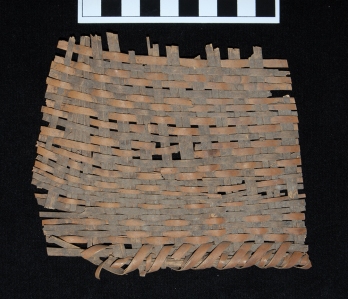 Simple plaited (1/1 interval) cane basket fragment with rim treatment dating to around A.D. 1100 (Object No. 2014.123.22). The darker strips have not been dyed but instead received a thin wash of black paint for decorative effect.

Few of these items have exact parallels in other artifact collections in the eastern U.S. and our current research is exploring the technological diversity and chronology of these materials, as well as the geological factors that promote their survival. Included among our various research goals is the desire for this work to guide future research at the site and shed light on Native American cultural diversity in this part of Tennessee which in more recent times reflected a confluence of the territories occupied by some of our own Muscogee (Jolie) and Cherokee (Weeks) ancestors, as well as those of contemporary Yuchi and other indigenous peoples.

Securing the future of Tennessee’s rich and venerable past for everyone – woven treasures and all — requires that we make efforts to protect and preserve both the perishable artifacts and the sites yielding them. It’s vital that we document and study these unique sources of information and help fill in the considerable gaps in the archaeological record when we can. Doing so ensures that archaeology contributes to more accurate and realistic depictions of ancient Native American cultural diversity and technological sophistication than has been previously possible. In this endeavor we are extremely grateful to Ralph Pickett for donating his late brother Jack’s collection from Ravens Cliff rockshelter to the Tennessee State Museum, and for the museum’s help in preserving these gems for future generations. 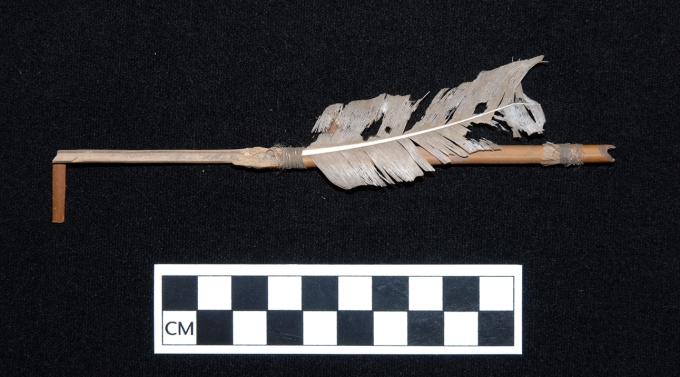 Fragment of cane arrow shaft with preserved turkey feather and sinew fletching radiocarbon dated to ca. A.D. 1100 (Object No. 2014.123.11). This atypical style is known as “tangential fletching” and is more common in the eastern Woodlands than most other places in the U.S.

All of the photographs are by Edward A. Jolie, made available courtesy of the Tennessee State Museum.

One thought on “Tennessee’s Woven Treasures”